This project was up and running from 2005 to 2009. At some point, we would have had to update to another, newer open source basis for administrating the sounds and this turned out to be a lot more intractable than anticipated. On the other hand, the interest of the community in open:sounds depended largely on record releases and the repository was only used after calls for contributions to physical release. So, consequently, we decided to stop this experiment and see if there would be a better, more feasible way to share sounds within the female:pressure community in the future.

In May 2005 open:sounds was created as an online production platform for the female:pressure community to exchange sounds and remix each others' tracks. [female:pressure is an international database for female* artists in the fields of electronic music initiated in 1998] Under the terms of a liberal creative commons license attribution-noncommercial-share alike, members of the community may freely use the musical material for new productions and remixes.

For us, this is an alternative to the conventional and sluggish way of producing our music under the full restrictions of copyright. open:sounds thus is a resource of sounds, patterns, melodies, vocals and songs created by, and accessible to, artists who are listed in the female:pressure database.

With this project we hope to stimulate and show-case the creative potential of the approximately 980 artists from 51 countries [january 2008], that make up the female:pressure community. Our goal is to cultivate the exchange of ideas and sounds and raise the visibility of female creations in the seemingly male dominated fields of electronic music.

To the public the finished tracks will be made available under the more restrictive creative commons' music sharing license attribution-noncommercial-no derivative works 3.0 unported. This license permits redistribution, but prohibits commercial and derivatives uses.

you could listen to streams of all open:sounds tracks. to the public, streaming is available under creative commons attribution-noncommercial-no derivative works 3.0 unported license.

formats we used for streaming were mp3 and ogg. they were packed within the standard playlist format "m3u". In order to listen to the stream you needed a program which associates m3u files with an audio-stream and is able to play mp3- and ogg-files. all audio players can handle mp3, with ogg things can be a bit more complicated. here's a list of players that work with both formats:

Our next step is to release a free dvd that showcases Vienna based VJs and video artists but this time accentuates the international character of female:pressure by using open:sounds music of various origin: female:pressure dvd1. Official release date is march 8, 2008. Physical distribution will be carried out by Hardwax, Berlin.

"17 Viennese activists responded to the call for an audio-visual female:pressure DVD and created the videos for 21 international soundtracks developed from the female:pressure music production platform open:sounds. They worked with images, light, and fantasy and obviously took great pleasure in visualizing. Respect, ladies, for the wide spectrum of different ways to transform sound into moving images! From live visuals of a club night to abundant animations to witty video clips... all works carry a distinctive signature. The compilation proves the synergies within the community - arising from interaction between stages, screens and dance floors of contemporary electronic music. open:sounds proudly presents: female:pressure dvd1. Viel Vergnügen, enjoy !i!i! (Christina Goestl, dvd1 design) 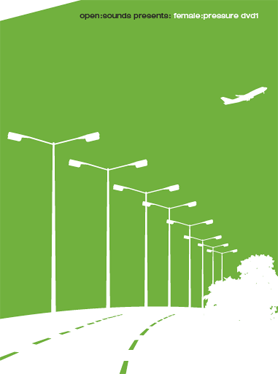 The first results of open:sounds were available on a free CD. All tracks by Vienna based artists. Released in March 2006. 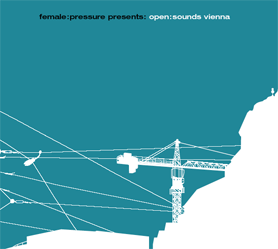 please find the CD press release in english and german version including information about the contributing artists. you can see a photo of allmost all the artists contributing to the CD on our pictures site. (unfortunately, june and suetoyou left a bit too early...)